Many of you may recognise me from standing in the middle of a field watching throwing implements land, standing by the side of a long jump pit or with clipboard in hand. However, you may not know how (and why) I got involved in officiating, the wonderful experiences it has given me and the lessons I’ve learnt along the way.

As we are likely to have a very quiet season ahead, it’s a good time to reflect on what got me into this position as people often question why anyone volunteers and give up their time for free.

The last 10 years have been a golden era for British sport, not just as an athlete but also as a volunteer. It’s not often in a person’s lifetime they get the opportunity to be actively involved as a volunteer as a Technical Athletics Official at a home Olympic, Paralympic & Commonwealth Games, World Indoor & Outdoor Championships and European Indoors.  Having these experiences may answer these questions and yes, I’m very privileged but these weren’t on my radar when I first got involved over 30 years ago.

From an early age athletics was in my blood, competing from the age of eight, representing Wales at school and U19 level and grabbing a coaching qualification along the way. But it was at university when I became qualified as a technical official. Why? Well as well as adding to the qualification portfolio you can gather when a student, the trite response was that I wanted to still be involved and ‘give something back’, but in reality it’s the sport that has continued to give back to me over the years. As well as the camaraderie and friendships I have developed over the years, and the common bond with my parents who were both officials – something we could share together - it has helped me grow and develop as an individual. 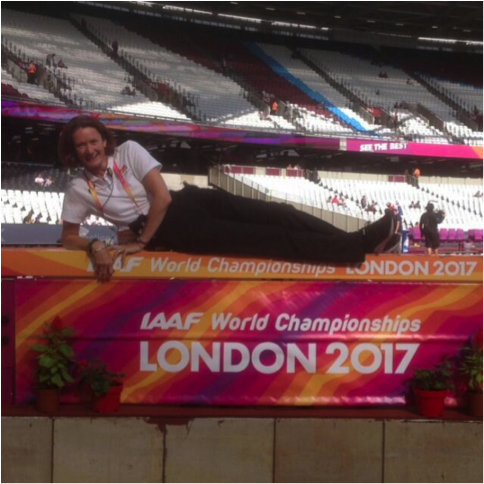 All the skills you need in many employed roles I have developed and put into practice on the athletics field; confidence in dealing with people, organising, time management, having difficult conversations, decision-making and effective communication. Whilst learning these skills, being treated to some experiences that could never have been imagined. What an experience standing in the middle of the Olympic arena in 2012 when Jessica Ennis was running her 200m, and when David Weir and Johnny Peacock were blazing a trail to various gold medals and experiencing that Olympic ‘roar’ day in day out.  Or walking past Usain Bolt as I shepherded the medal winners of the men’s Long jump to mixed zone at the World Champs in 2017 or leading & coordinating the field team as Combined Events referee at the European Indoor Championships.

I still enjoy officiating at all levels - organising a team of officials and parent volunteers to ensure all the athletes can compete safely and have a positive learning experience. Or seeing children succeed, get a PB or just enjoy competing can be a reward in itself.