2022 saw a return to competition for many as the top Welsh athletes prepared for a busy summer littered with Major Championships.

The Welsh Indoor Championships at NIAC in Cardiff saw Hannah Brier headlining the event, setting a Championship best of 21:45 with Lauren Evans jumping a new P.B. of 1:80 in the High Jump.

In the same month Libby Hale broke the U15 1500m Welsh record at the Junior Indoor Open Day.

Natasha Cockram took the Welsh Half Marathon title at the Cardiff Half Marathon in late March as Wales’ largest Mass participation sporting event returned following the Covid-19 Pandemic. James Hunt (1:06.06) also claimed the men’s title. Cockram’s time of 1:10:47 made her the second fastest Welsh Woman in history at the time!

In May, Jake Smith set a new Welsh all-comers record for 5km at the Cardiff 5k Race For Victory in 13:59. Abed Tewledebrhan (14:31) and Anna Bracegirdle (16:10) claimed the Welsh titles here.

The Welsh Senior & U15 Championships came too late for athletes to record qualification marks seeking Commonwealth Games selection but was agreat opportunity for athletics fans to see a good number of the team for Birmingham in action on Welsh soil at Cardiff International Sports Campus.

The International Snowdon Race is the top Mountain Race in Wales and hosted a Home Countries International with an additional Italian team also in action. Tom Wood was the top Welsh finisher in seventh and Joanne Henderson the first Welsh female in 11th place.

Welsh athletes warmed up for this summer's Commonwealth Games in spectacular style at the Muller UK Athletics Championships in June. In the Women’s 100m Hannah Brier became the fastest Welsh woman in history as she broke her existing national record of 11.39, which she held jointly with Sallyane Short and Elaine O'Neill.

Jeremiah Azu became the first Welshman to run sub 10 in the 100m with a wind assisted Welsh record. Azu also became the first Welshman to win the UK 100m title since Ron Jones. Middle distance runner Melissa Courtney-Bryant claimed a silver medal in the final, finishing second to Scotland’s Laura Muir. Adele Nicoll exploded in the fourth round when she launched the shot put to a huge 17.59m - obliterating her previous best of 17.17m to take home the British title. In the 5,000m racewalk Bethan Davies claimed her 7th British title with a time of 22:30:59, Gracie Griffiths took home the silver medal with a personal best of 25:18:40.

In July Ophelia Pye took god in the 400M hurdles to help Team GB to top the medal table at the European Under-18 Championships in Jerusalem. Pye took home a new PB and second Championship record with a time of 58:09, an improvement of half a second from the Semi-Finals.

Later that month the Commonwealth Games was hosted on British soil for the first time in 20 years, with the Welsh athetes holding their own among the worlds best. Jake Heyward broke the 1500m Senior Welsh Record at the games with 3:31:08 to finish fifth. There was a British and Welsh record for Heather Lewis in the 10,000 Race Walk.

Olivia Breen took home a sensational gold ahead of Sophie Hahn of England, running a new PB of 12.86 in the Women's T38 100M.

Julie Rogers took to the arena in the Women's F42-22/61-64 Discus claiming a new European and Games record for her classification, which saw her throws improce from 16.88m to 20.57mm. Here Raza points total place her in 8th in the mixed classification field.

The Asics Home Nations 5km International was an exciting new initiative between the organisers of the Podium 5k races and Welsh Athletics. The flat and fast multi-lap races at Coopers Field were won by Cardiff man Jake Smith (14:05) and Scotland’s Annabelle Simpson (15:51) with Jenny Nesbitt (15:53) the top Welsh competitor in second.

The Welsh Road Relay Championships is the first off-track Championships of the Autumn season where both Senior titles were won by Swansea Harriers but there were strong showings from both Pontypridd Roadents and Les Croupiers. 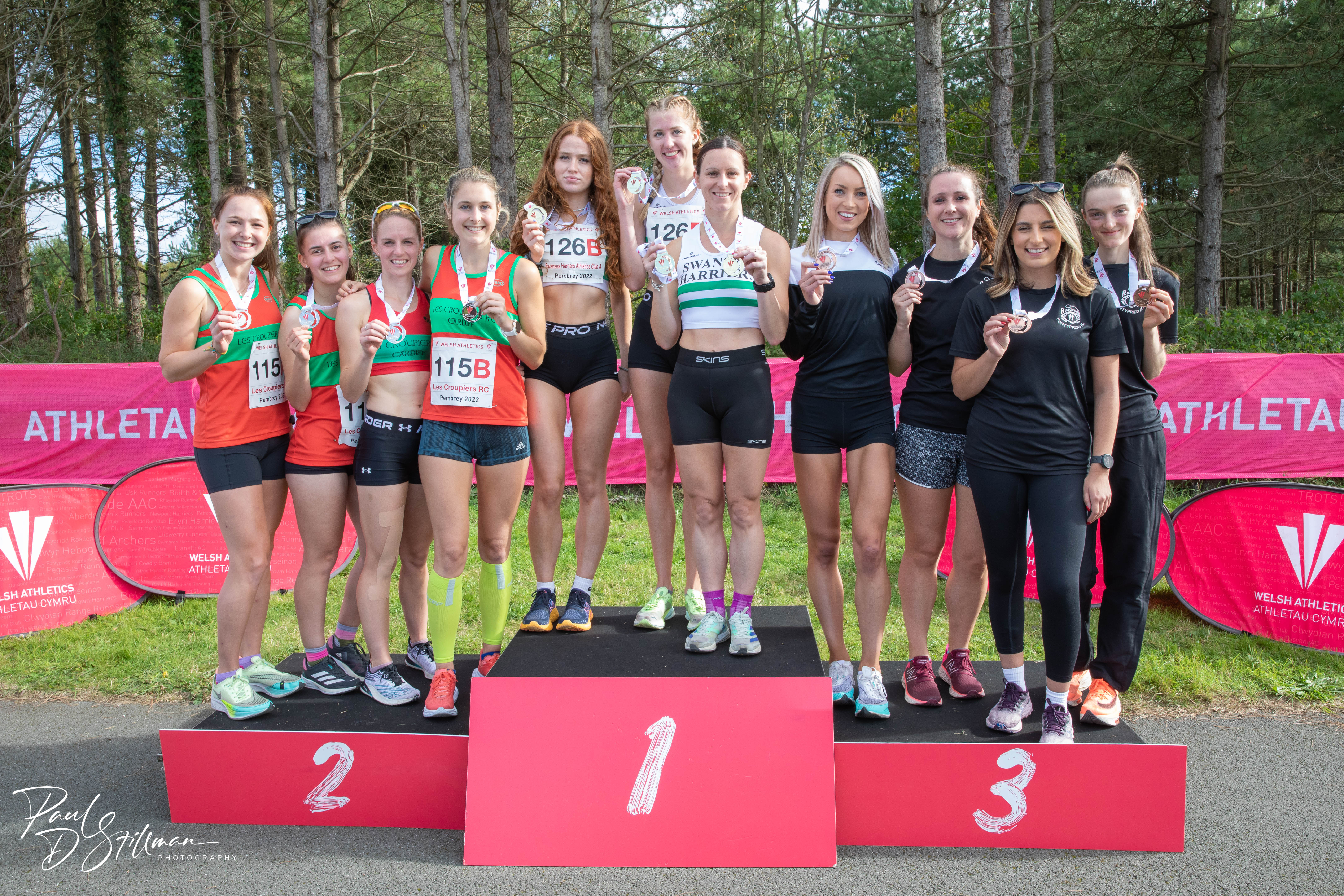 The Cardiff Cross Challenge came two weeks later holding a prestigious Gold Label in the World Athletics Cross Country Tour. The men’s race was won by former World Junior 10,000m Champion Edward Zakayo and the women’s race by Pamela Kosgei, sister of the World Record Holder for the marathon, Brigid. Emile Cairess and Amelia Quirke were the first British Athletes and Ciaran Lewis and Jenny Nesbitt were the first Welsh athletes to finish.

James Heneghan was emphatic as the winner of the Mixed Relay Trial Race at the British Athletics Liverpool Cross Challenge. He was joined in qualifying for the Great Britain & Northern Ireland teams for the Spar European Cross-Country Championships by Cari Hughes. Heneghan helped his team to fifth place in Turin with Cari Hughes finishing as the third GB scorer in 22nd and helping her team to the silver medal.

The evergreen Andrew Davies claimed a bronze medal at the IAU 50km Championships in Spain in late October with 2:53:09 going second on the Welsh all-time lists behind Dan Nash who finished seventh on the day.

In the Valencia Marathon, Natasha Cockram broke her own Senior Welsh Record, setting the new mark at 2:26:14 which saw her rise to 6th on the UK all-time rankings.

At the close of 2022, Swansea Harrier Libby Hale (U15 Girls) and Carmanthenshire Harrier Iwan Thomas (U17 Men) currently lead the British Athletics Cross Challenge Series with several other Welsh athletes featuring promininatly ahead of the re-start at Perth in mid January.