On an overcast but warm day with just a few drops of rain, racing against the best junior mountain runners in the UK and Ireland on the tough up and down courses, Wales under 17’s can be very pleased with their male and female bronze team medals in the 4.80km/250m race. Finlay Cullen led the male team home in 11th place followed by 13th Aled Breeze, 17th Iwan Foley and 21st Ben Sergeant. Mackenzie McCourt led the female team home in 37th place overall and 5th female followed by 10th Caitlin Jones, 15th Isabelle Shaw and 23rd Anwen Hockley. A special mention to Iwan Thomas (Carmarthen) who missed the Welsh trial race for the event but made the worthwhile effort to travel up to Cumbria to compete in the event as an “Open” runner and was very impressive in finishing 2nd overall. Iwan is certainly one for the future.

In the under 20’s 5.72km/296m event, Edward Woodhead led the male team home in 12th place followed by: 19th Noa Vaughan, 26th Rhys Llewellyn and 30th Sam Gunning, though disappointed not to have won any team medals, they all will have gained valuable competitive international experience from the event as will our two female athletes, Beth Rawlinson, who ran very well to finish 6th female and 11th Maddison Griffiths.

Credit is due to all of the Welsh athletes for their exemplary behaviour and pride in wearing the Welsh colours throughout the competition. 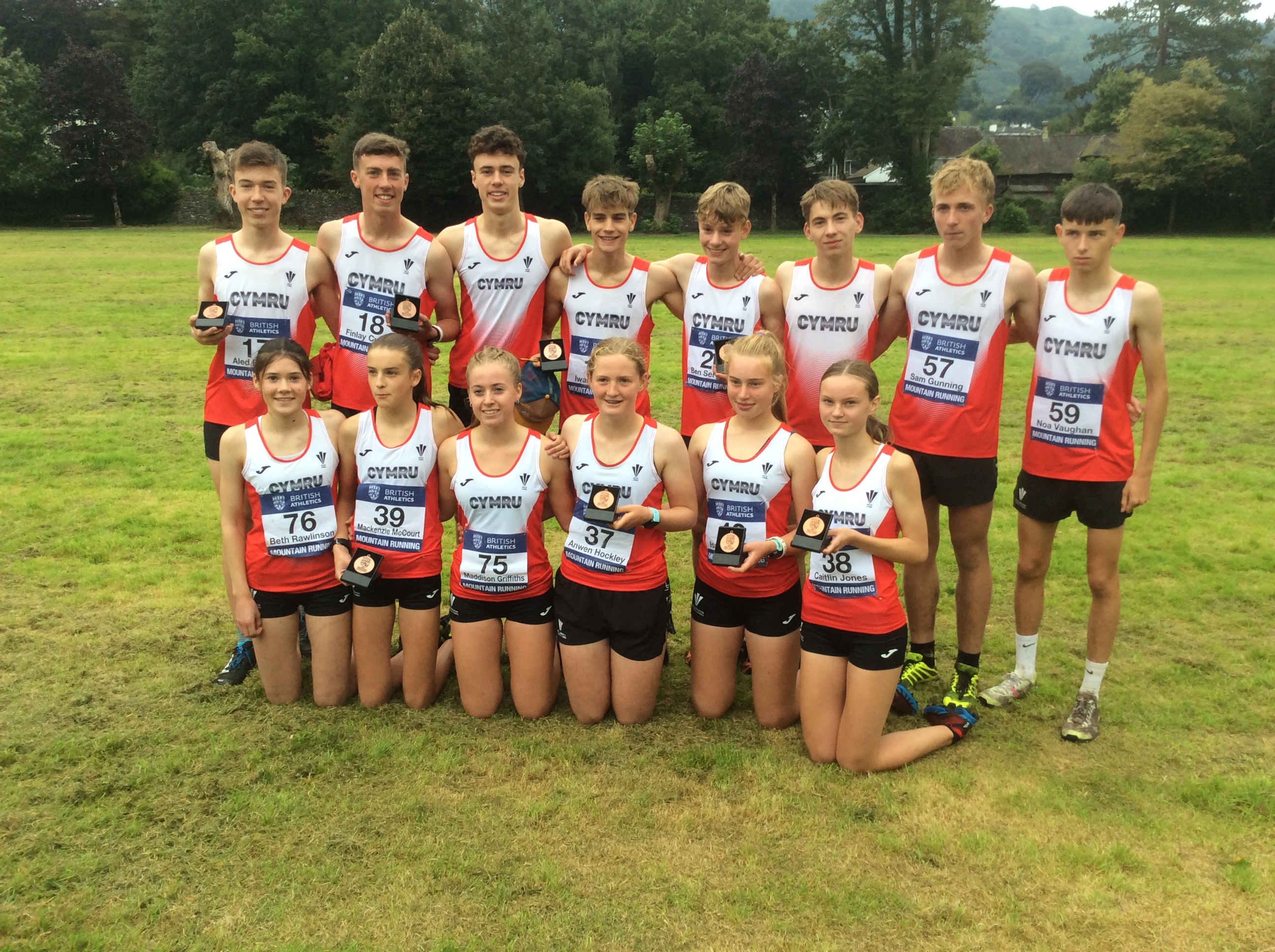 Thank you also to Sharon Jones and Steve Livett for their Team Management duties, ensuring all of the athletes were well looked after in a relaxed and friendly environment.

At the UK School Games, it was a gold medal for Jessica Lee (Carmarthen) who jumped a distance of 5.79m to edge out second place. In the discus, Storm Evans (Carmarthen) finished in third with a best throw of 39.82m, whilst it was a fourth place for Lucy Harris (Swansea) who threw 37.66m.

In the Boy’s long jump, Benjamin Parker (Aberdare) finished second with a best jump of 6.73m, whilst in the plot vault, it was Aharon Graham-Mulvaney (Cardiff) who recorded a best clearance of 3.70m, to finish in sixth, with Harry Newton (Swansea) also clearing 3.70m to finish seventh. In the high jump, Osian Roberts (Cardiff) landed a spot on the podium, finishing in third with a best jump of 1.95m.

In the Girl’s 80m hurdles, Sophie Lisk (Cardiff Archers) finished in fourth, crossing the line in 11.43s. In the longest track event of the day, the 3,000m steeplechase, it was Cara Scott (Menai) who placed sixth with a time of 5:18.45.
For Zico Jones (Shaftesbury Barnet) it was a golden victory in the 400m, running a time of 49.50s. There was another podium spot, this time in the 1,500m steeplechase, with Tristan Cumberland (Brecon) finishing in third, with a time of 4:25.04. Whilst Iolo Grant (Cardiff Archers) finished in fourth in the 100m hurdles with a time of 13.42s.

European bronze 100m medalist Jeremiah Azu (Cardiff) put together another fantastic race over in Berlin to finish third in the Men’s 100m, in a time of 10.16s.