Meet Lorraine. Lorraine is preparing to volunteer at this years Commonwealth Games. Having been named as a ‘Technical Team Member’, Lorraine’s role will allow her to get up close to all the action taking place! She has been attending specific training days in the lead up to the Games, which are now less than 50 days away – in order to be as well prepared as possible come the Games.

Here is what Lorraine has to say in the lead up to carrying out her role!

What are the reasons for wanting to volunteer at the CWG?

“I have volunteered within athletics in one capacity or another for a number of years.  When I initially saw the request for interested people to apply for volunteering roles at the CWG in an advertisement, I knew this was an opportunity I did not want to miss”.

Having been allocated the role as a technical team member, Lorraine’s main role will be within the technology section.

“The role will entail working in the results, scoring and timing technical team with Longines.  Thus far, I have attended a role specific training day in Birmingham.  Just before the games commence, I will also attend a couple of training days on a range of equipment at the Alexander stadium.  The training will be delivered by Longines”.

Although now incredibly excited about the prospect of volunteering at the Games, Lorraine says she was initially a little apprehensive about applying to volunteer.

“When I first applied, I was a little apprehensive as I had no idea what role, if any (if successful following the application process) I could be allocated.  Since knowing my application was successful and what role I have been allocated, I am now incredibly excited and really looking forward to the experience”. 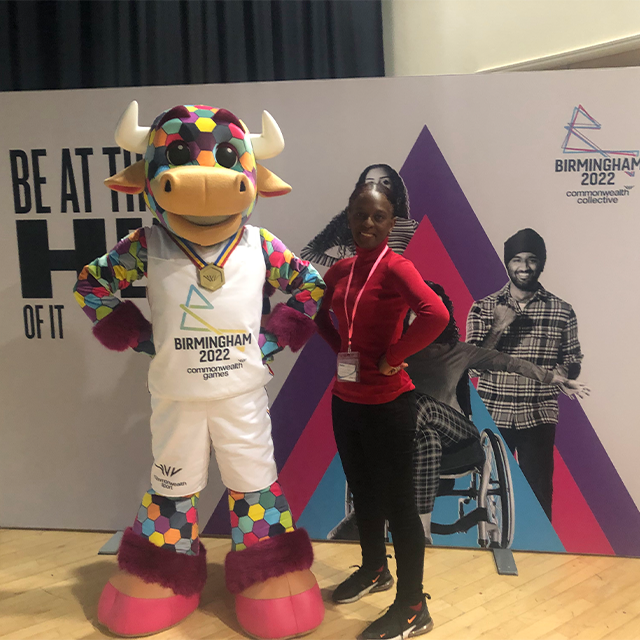 Lorraine is not a volunteering novice, she has been involved in volunteering for over 20 years, initially when her eldest daughter started athletics as an u11.

“Back then, I started to assist with coaching as it just seemed to make sense to do so (probably because sports, in some capacity, have always played a large part in my family life growing up).  This soon progressed to helping out with officiating as a parent helper at league competitions.  I had a break for a number of  years, then later returned to assistant coaching again when my second daughter retired from gymnastics as a GB junior gymnast and wanted to transfer to athletics.  I realised very quickly just how much I missed coaching athletics and decided to gain more coaching and officiating qualifications as both disciplines compliment each other really well”.

She goes onto say

“My voluntary experience is incredibly varied.  To date, I have volunteered in the following areas: Qualified level 2 Coach (sprints specific) and club Coach Coordinator and committee member for Cardiff AC.  Initially, I coached sprints along side another established female coach within Cardiff AC for three years from October 2018.  This was a great experience as it enabled me to build on my previous coaching knowledge (more detail below) as well as being at the forefront of an athletes journey as they transformed from a talented junior, to a GB international.  More recently, my voluntary coaching includes coaching the majority of track and field events to a small group of combined events junior athletes (to date. I have coached 50% of the group to receive Welsh International junior representation).   In addition to this, my voluntary working with Welsh Athletics includes: Equality and Diversity Sub Committee member and Female Coach Ambassador.  I also volunteer for both Cardiff AC and Welsh Athletics in an officiating capacity involving Photo Finish, Field Official and hand time keeper at a variety of competitions”.

"I would like to congratulate Lorraine on her selection at this summer’s Commonwealth Games in Birmingham as a technical team member role. Selection for an international event of this scale is a wonderful achievement and well deserved”.